It was my birthday last week.  I love birthdays, because at some point a few years back I decided that all birthdays need to be properly celebrated.  This is partly a reflection of my desire to feel special, but most importantly, I love to have an excuse to do something different, have some fun, and get together with a few people.

It’s pretty hard these days to keep your birthday a secret – social media has changed things in a way which encourages celebration.  These days I get bombarded with fantastic facebook messages, texts, tweets and emails – all because these systems have built in reminders and flags for people so very little effort is required to pass on the joy.  People have a cast iron reason just to say hi and connect – and I think it feels fabulous to receive these greetings.  Even a simple “happy birthday” from someone on the other side of the world you haven’t seen for years has that feel good factor which makes me smile.

We should all spread the joy of celebration more often than just birthdays.  It’s always more powerful in our day to day relationships to have a positive reason to connect and share – it helps us remember how many good things there are in our lives.  In my family we are in the habit of going out for BBQ ribs at  the start and end of school terms, or eating special ice cream when someone gets recognised via a merit certificate in school assembly.  Most families have these types of rituals in place for major events and milestones, but what if we take the concept further, and make it a habit to find something to celebrate once a week.

It doesn’t have to be anything big, and you don’t need to justify your actions or set a benchmark on what is worth celebrating.  Celebrate getting a report finished at work, someone going on holidays or returning, your dog’s birthday, a new coffee shop or wine bar opening up.  Jump for joy when your son scores a try at rugby or just because he tries out a new position on the field.  Create anniversary excuses to meet friends and colleagues you haven’t sat down with for a while – “it’s 5 months since you introduced me to ginger tea – let’s celebrate!”.

The lives we lead these days, particularly as busy working parents with hectic schedules, restrict our ability to connect and share informally.  Our time is carefully controlled, and it’s easy to sink into a routine where everything is focussed on things that went wrong or disrupt our carefully planned lives.  We always have too much to do and our tendency is to get grumpy, snappy and feel that the glass is half empty.  Find a positive reason to connect with someone else once a week,  get that glass half full with some metaphorical (or real!)champagne, and practise celebrating the small things so the big things don’t pass you by. 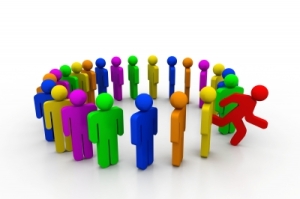 There’s no “I” in TEAM – but if you look carefully you’ll find a “ME”…. a few years back, this phrase was often bandied about accompanied by smiles and chuckles – usually in reference to someone in authority who was using the guise of encouraging teamwork to further their own interests.  Jokes aside though, maintaining our individual identities in a team environment both in the workplace and at home is a key factor in finding balance and satisfaction in our lives.  If we lose track of ourselves, we quickly start to feel taken for granted, trampled on, and resentful of others in the “team”.

I’ve always found it difficult to maintain a sense of my own identity at home.  I’m not sure if this is historically due to the hang ups inherent in being a middle child, or just that I’ve always got so much satisfaction from getting things done that I get lost in over organising everyone else and forgetting to do anything for myself.  My experience is that working parents, particularly mothers and single parents, get into the habit of putting everyone else’s needs before their own.  The other team members – in this case in the family – get used to this state of affairs, so it perpetuates – often because it is assumed that the mother or parent enjoys doing things that way, or out of fear of doing something wrong.  As a control freak, I know I’ve often dealt harshly with anyone who messed with my system, purely because I wanted to get things done as efficiently as I knew how with no tolerance for variation.  Over the years I would have snapped at anyone who stacked the dishwasher wrong, folded the towels in a way they didn’t fit into the cupboard, or put the milk in the space the juice should be in the fridge.

At work, teamwork has long been held out as an important behaviour we should display.  Again we women in particular assume that our contributions to the team will be recognised, and we often feel resentful if others are recognised as individuals.  I’ve often felt like teamwork is used as a cover for more “take” and less “give” by some individuals – leading to me channelling a “victim” mentality, withdrawing  myself from the team,  picking up my toys and leaving the playground.

It was a stark situation of personal crisis that changed my view, and with it my perception of how to preserve the “me” in all parts of my life.  As I struggled to recover, I discovered that setting my own boundaries for my interactions with teams was critical.  The boundaries I set helped me foster a feeling of control, which made me more confident.  The boundaries are tested and re-set many times, but  despite initially feeling restrictive, they have made it easier to take decisions and chose when to say yes or no to things (see EyesUp #1 for more on saying No!).

These boundaries started simple – such as controlling communication channels – for example, please text me when you want to talk, and I’ll call you when I’m ready – giving me time to prepare my response.  I’m still using this one in the workplace – screening calls when I’m busy, and only checking my email once an hour instead of constantly.  Does this show a lack of commitment to the team if I prioritise my time this way?  Not when these actions improve my ability to operate efficiently and effectively by ensuring that when I respond, I give other team members my full attention.

Has this made me a more “selfish” person?  I believe it’s actually made me a better team member.  If I feel my life is in balance, and I am in control, I am more present when contributing to the team.  I’m not wasting energy on resentful feelings or self pity, or being distracted by other issues, I’m contributing the best I can at that point in time.

Teams can be greater than the sum of their parts, and one step towards this is to ensure each team member has preserved their own sense of “me”.